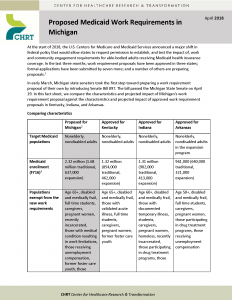 At the start of 2018, the U.S. Centers for Medicare and Medicaid Services announced a major shift in federal policy that would allow states to request permission to establish, and test the impact of, work and community engagement requirements for able-bodied adults receiving Medicaid health insurance coverage. In the last three months, work requirement proposals have been approved in three states; formal applications have been submitted by seven more; and a number of others are preparing proposals.1

To read the full brief, click on the image above.

Center for Health
and Research
Transformation